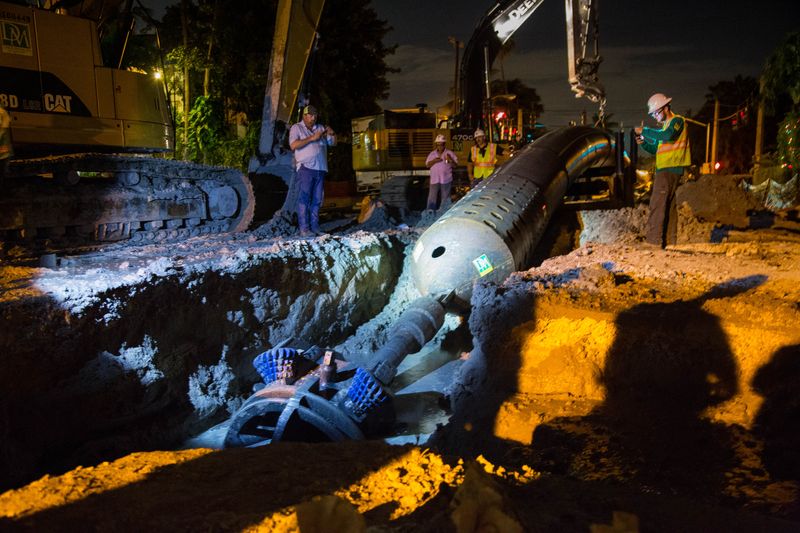 Dozens of people lined the street. Up and down Euclid Avenue, less than a mile from Miami’s famous South Beach, crowds were forming. With camera phones at the ready, they watched a 54-inch high-density polyethylene (HDPE) pipe readied and pulled underground. ISCO Industries’ sales rep Bryan Fletcher had been working for months with the contractor on the job to provide HDPE, equipment, and field technicians to make this incredible job a reality. Most onlookers had no idea what exactly they were watching, but each one of them could tell it was something remarkable. And it was. In fact, it was record-breaking.

It was the culmination of years of work. In 2013, the City of Miami Beach conducted a condition assessment on the existing 54-inch sanitary sewage force main conveying sewage through the city of Miami Beach to the county wastewater treatment plant in Virginia Key. They discovered evidence that after years of satisfactory service, the sole pre-stressed concrete cylinder pipe (PCCP) sanitary main serving the City was deteriorated and potentially at risk of failure due to “Hydrogen embrittlement.”

Since the early 1970s, more than 500 PCCP failures have been reported. Most of those failures occurred in pipe manufactured by Interpace Corporation using Class IV reinforcing wire. According to a report published in 2008 by the American Water Works Association Research Foundation (AWWARF) and the U.S. Environmental Protection Agency, in order to achieve strength in the wire, it was drawn through dies at high speed, creating temperatures in excess of 400 degrees F. The report states the process “proved to be detrimental to the wire, both serving to induce longitudinal cracks and to make the wire particularly susceptible to hydrogen embrittlement.”

But, let’s take a minute to think about the ramifications; what it would actually mean if there weren’t an option to put leak-proof HDPE into place. Failure of this force main, which is the sole means of wastewater conveyance, would be catastrophic in impact. It would potentially discharge millions of gallons of raw sewage in a residential area of one of the most popular tourist destinations in the world. It would impact residents and commercial operations while contaminating the pristine and ecologically sensitive waterways and beaches. The economic impact of forced closures of hotels, restaurants, and beaches would devastate the City. Thankfully, that wasn’t the outcome. Instead, it was a historic moment of advancement for the pipeline industry.

Also, check out these videos of the project site!