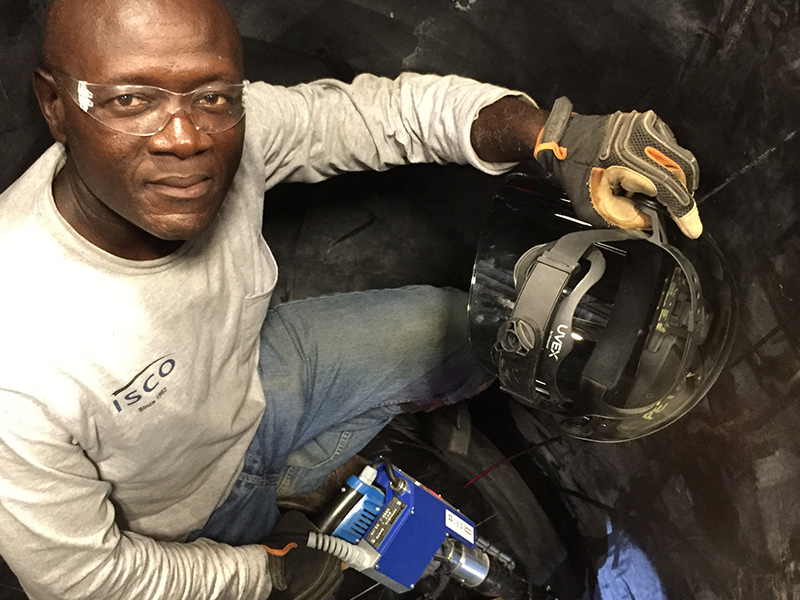 Say hello to Peter Kamdoum, plant manager of ISCO’s Baton Rouge facility! Peter has been with ISCO for a year and eight months. He started as a field technician and worked in the shop before becoming the manager in Baton Rouge. He’s a mechanic by trade with a degree in process. His favorite part of working at ISCO is the new and different challenges of each day. “So many fabrications we do are unique and vary from project to project, it is never monotonous or redundant as we plan our work to maximize efficiency by moving from one machine to the next, performing many operations,” he explained.

Peter graduated from college in 1992 with a degree in Marketing Management. In 2004, he moved to America from Cameroon, a French colony in Central Africa. In the process of learning English, fell in love with science and technology. “I am inquisitive by nature,” he said. “I Love studying the behavior of other people. Even though I may not always be able to explain or understand why people think the way they do, I derive enjoyment out of motivating others.”

In 2003, before moving to America, Peter spent a month of vacation among the Baka Pygmies southeast of Cameroon. “Pygmies in Cameroon are still living away from civilization through hunting and gathering with in-depth knowledge of nature,” he said. “Learning to survive every day without assistance of technology of any sort was like being born again!” What an incredible experience!

Peter is happily married to his wife Jeanne Ngo Tchomb and they have been blessed with six “amazing and strange” children; three boys and three girls! “Unfailingly, the boys are always able, without coaching, to read and count by 15 months. The girls are full of more common sense. Beautiful paradox!” Peter explained.

He’s not without his hidden talents too! You might be surprised to know he’s a Black Belt in Traditional Japanese Shotokan-Karate. His other hobbies include reading and learning about other people’s cultures.

Thank you for letting us get to know you, Peter!